This article is co-authored by Colombe Cahen-Salvador and Andrea Venzon and was originally published in Democracy Without Borders. Click here to read the original piece. 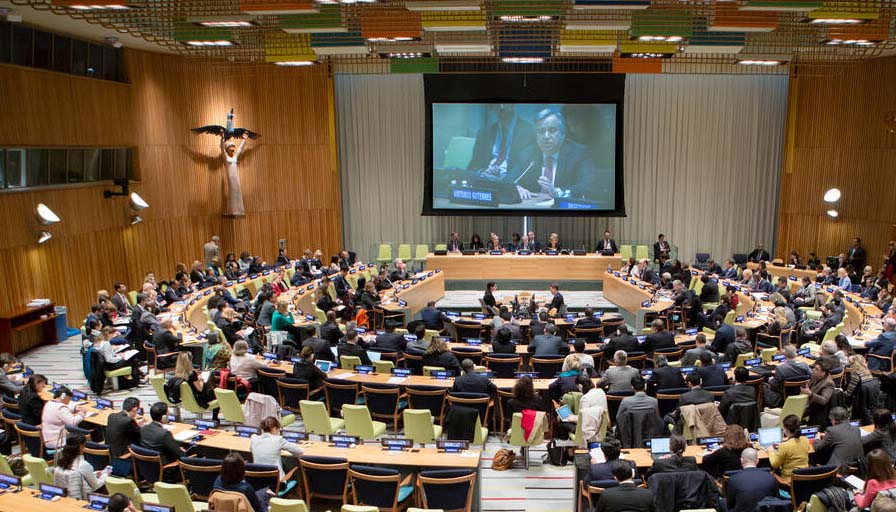 From 12-14 April 2016, the General Assembly for the first time was holding public dialogues with eight candidates for the position of the next UN Secretary-General. Eventually Antonio Guterres was selected. Image: UN Photo/Manuel Elías

The selection process of the United Nations Secretary-General is underway. The process is obscure, the timeline unclear and the stakeholders are meeting behind closed doors. This is problematic on a number of levels.

The world is facing unprecedented global challenges: climate change is accelerating, democracy is being eroded, and while the current pandemic is still raging it is clear that vaccine nationalism is taking precedence over collaboration.

In addition, the United Nations are silent on urgent world issues, as shown by the incapacity of the Security Council to take meaningful action on the crisis in Myanmar, while people are losing their lives every single day. This is not a new problem, we all are too vividly aware of Syria.

Finally, the lack of democratic processes within the United Nations is not a surprise considering the make up of the institution – authoritarian and democratic governments alike can join – and democracy doesn’t appear once in its founding Charter. It is also clear that the UN will never become a fully democratic intergovernmental body – it can’t. However, it is still appalling that there is no transparency nor any open deliberative process: how can the leader of the free world be chosen behind closed doors, in a process resembling all too closely papal conclaves.

That’s why we launched the global political project Forward that is organizing open digital primaries to identify the first people-backed candidate for the position of United Nations Secretary-General. People from all corners of this planet can join this initiative, vote and themselves become a candidate. Only two requirements exist:

First, candidates cannot be men: they have to be of a different gender. There have been nine Secretary-Generals in the last 76 years and all were men. As Antonio Guterres said on the 7th of March 2021, “Gender equality is a question of power. But equal power will not happen by itself in a male-dominated world”. Men have had too much power compared to others for too long. It’s time to change this at the highest office in the world.

Second, people joining the Forward initiative, whether as voters or candidates, must have and uphold the following progressive vision: human societies can progress only if every one of its members has access to the same opportunities and enjoy the same rights in every territory, nation, and state.

Forward’s campaign has little chances of succeeding this time around, but is a necessary energizer and disrupter in the lack of global politics. By having people from all over the world uniting behind a candidate, the hope is that member states will have no choice but to think twice about this outdated selection process, and what it says about today’s vision of the United Nations.

Hopefully, this will be the beginning of a wider conversation: in 2021, can we still accept to put our faith in an international organization dominated by the winners of the Second World War? Certainly not. In 2021, should democracies work closely together and bring about the creation of supranational, democratic governance that represents the true will of the people? This is our hope.

For now, there is a clear need to challenge the status quo. Help us do so by joining Forward!